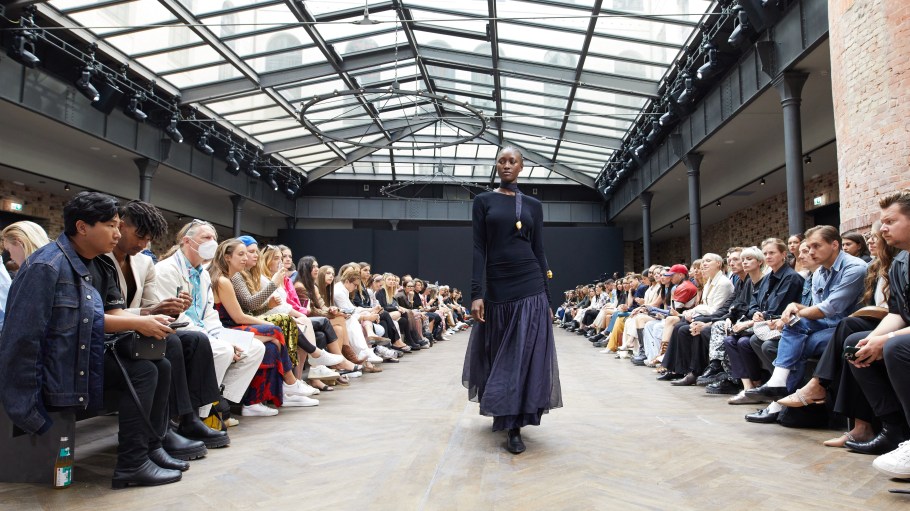 Doused in soothing lighting and the sounds of waiters’ popping corks of Champagne bottles and two jazz musicians playing in a nearby room, a few Ukrainian designers and about a dozen industry supporters mingled in the clubby Ned Hotel in Manhattan’s NoMad neighborhood on Sunday night. That scene could not have been more counter to their war-torn homeland, where they are trying to keep their businesses going.

Seven months after Russian troops first invaded Ukraine, six designers will be presenting their collections Tuesday before venturing on to London, Paris and Milan. There also was a stop in Berlin for some. Designs from Elena Burenina, Bobkova, Frolov, Litkovskaya, Kovalska and Gudu will be showcased, but not all of the designers were able to travel to New York. Fueling the Ukrainian economy is an edict that was put forth by Ukraine’s President Volodymyr Zelensky and his wife Olena Zelenska that multiple industries are trying to meet.

Lilia Litkovskaya, whose designs are often worn by Ukraine’s first lady, described deciding to leave Kyiv on Feb. 24 to ensure her three-year-old daughter’s safety. “My husband stayed in Kyiv. I did not want to leave,” she said.

Once she, her mother and her daughter were settled in Paris, the designer decided it was time to get back to work, driven partially by a large order that Selfridges had placed two days before the Russian invasion. She reconnected with her team, including those who had relocated to other parts of Ukraine, and shifted production temporarily to a large manufacturer of wedding dresses. “I feel that it is very important to save the future of my team,” she said.

Litkovskaya is once again working in Kyiv and its founder is dividing her time between there and Paris, where her daughter remains. Encouraged by advancements made by Ukrainian fighters in recent days, she said, “I believe in my country. I believe in the United Nations. And I believe that every Ukrainian’s goal is for a victory.”

During Paris Fashion Week, she will stage a fashion show on the carousel in the Tuileries Garden. “Everyone in Ukraine can remember how they were in childhood and think about that peaceful time. I would like to show my Ukrainian vision and contemporary Ukraine,” she said.

Litkovskaya said her collection is coauthored by those who wear it. Removing her blouson jacket with a satin side-tie belt to show how she intentionally covers her name on the inside label, she explained, “The clothes on hangars are nothing. But the people who buy it, continue the story.”

Global Fashion Agenda’s CEO Federica Marchionni explained why she wanted to be at Sunday’s event: “From the moment that the war started, you really understand the importance of solidarity and how the people of Ukraine need to feel that they are not alone.”

Ivan Frolov arrived in New York from Los Angeles by way of London, where he had traveled to check on samples production. Angel for Fashion founder Jen Sidary has been instrumental in coordinating the seven-year-old brand’s production. When the war started, he canceled all of the pending orders to save money. He exited Ukraine on Sept. 3 after gaining approval from the Ministry of Culture, which has authorized people who work in the arts to temporarily leave for cultural events in other parts of the world. “September is the high season for a lot of events in the arts. This September is very important. We need orders from buyers. The livelihoods of our whole team and the life of our brand.”

All of the 35 employees are still on the payroll at the same salary they earned before the war. “They are my biggest inspiration this season. It’s not anything having to do with fashion, or the artistic world, cinema, books, artists or paintings. My team is my only inspiration this season. Mentally, it’s very difficult when you are in the midst of a war to create something beautiful,” Frolov said.

To that end, he noted how Frolov has two initiatives to help raise money to aid those impacted by the war. “We are here to support the economy of our country and show our brand in the best way. All of our production is still in Kyiv,” he said, adding that all of his team, with the exception of two employees who were traveling with him, are in Ukraine. As one of the brands that is being represented by Tomorrow Ltd. this season, Frolov will travel to Milan, Paris and London as well.

Although Kyiv’s main department store Tsum has reopened, sales there, quite understandably, have changed since the invasion. Frolov continues to sell direct-to-consumer. As for whether Frolov felt guilty being so removed from the situation in Ukraine, he glanced around at guests in the The Ned’s library and said, “Our forces and our army are fighting for freedom for the whole world. These people here, who are having cocktails and are going to their special events, can’t understand what is happening in Ukraine. But it’s nice. I wish that no one in the world would ever have to understand what we are going through.”

Fueling the economy in Ukraine is a form of fighting, Frolov said. “In order to continue to develop and save our brand, I need to be here and go to fancy cocktail parties and speak with people about the war. It’s very important because it’s still going on.”

Although he is not required to take part in the war, that could change. “Right now I feel that I can do more if I continue to be a designer, do my best work and develop my business. That can give me the opportunity to donate to the army [through designated sales] and support the economy of country. After the war, we will have even more problems with the economy and soldiers, who have lost legs and hands,” he said, adding that he sees such wounded soldiers walking past a hospital on his daily commute to work. “This has motivated me and my team to continue to work and to continue to fight. Everything is OK with us: we still have hands and legs and we can go to work to do our jobs as well as we can.”

The fact that this Ukrainian initiative came together is an act of goodwill by several individuals and companies. Having participated in the Kyiv Art and Fashion Days last year, Parsons School of Design director of programs Keanan Duffty checked in with the event’s organizer Sofia Tchkonia soon after Russian troops had invaded Ukraine to inquire about the safety of the Ukrainian designers he had met last year. From the start he was intent on figuring out how Ukrainian designers and their businesses could be represented during New York Fashion Week.

Duffty said, “One of the first people I called was Kay Unger and she immediately said yes. One of the people she introduced me to was Deborah, who jumped right in..[and arranged for] the opportunity to show at Mastercard. She also introduced us to FashWire’s CEO and founder Kim Carney, who has been incredibly generous. I reached out to Tommy Hilfiger, who was very kind and pitched in with some of the travel and hotel rooms [costs]. Kay connected with us with Donna Karan, who has been extremely generous.”

Hilfiger planned to attend Tuesday’s event and Karan planned to host an event for the Ukrainian designers Wednesday night. Public relations executive James LaForce provided his office space for the designers to do their castings and fittings Monday. After singling out his events producer wife Nancy Garcia for her help, Duffty said, “When I came up with this idea, people said to me, ‘Why is it important to support fashion when there is a war happening in Ukraine? People are dying. Children are suffering. Why not give to those organizations?’ It’s a great question. My answer would be that art and creativity are really important to all of us because they make us human. They allow us self-expression. That’s why it’s important to show all of your creative talents and to show solidarity.”